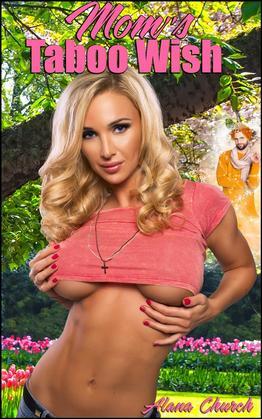 His head jerked up to find a pair of dark blue eyes looking at him. Not angry, thank God. Curious, maybe? Or perhaps even ever-so-slightly worried? Concerned that her only child would look at her and decide that he could do better?

"Quite a bit," he answered, somehow managing to hold his voice steady. "What there is of it."

"What?" Her voice held incredulous disbelief.

"Well, Mom, I won't say your legs aren't lovely. But, you know, they're just isn't much of them. It's not your fault," he added piously. "I mean, you can't help it that you're so short."

"Hah. You saw a lot more the other night. And you blew your chance."

He grinned. "Totally worth it. How many people can say they blew a raspberry on their mother's stomach?"

"The ones who are six years old?"

"Hmph. You haven't shown me a whole lot to be jealous of, now have you?"

He met her eyes, ignoring the gibe. "And I got such a short look. Maybe...you wanted me to see you, Mom? All of you?"

If he hadn't been watching her reaction, he might have missed the way the tips of her breasts stiffened, pressing against the cloth of her shirt in such a way as to make her arousal undeniably evident. "Just like a boy," she sniffed, turning her head away, though her breath quickened.

He leaned back, both of her feet in his lap, as his thumbs ran circles around her soles and his fingers massaged the tops, running over the fragile bones. "You show me yours, I show you mine? Pretty kinky, Mom."

"Like you haven't been staring at me like a freshman at the head cheerleader for the past week," she retorted. Her foot pushed, ever so slightly, into his crotch, as if she was testing him. Hoping to find...what? "All I want is what's fair."

He paused, letting the moment play out. Then, without saying a word, he moved her feet to the side and unbuttoned his shorts. The sound of the zipper being lowered was very loud in the quiet room.

He pushed the shorts down his legs, then flicked them to the floor. Miranda wetted her lips with her tongue and stared at his crotch. "The boxers, too," she whispered.

Brendan could see the pulse pounding in his mother's throat, and the tan expanse of her stomach was sheened with sweat. But he pushed down the waistband of his underwear without a second's thought.

Her underwear slid down her legs. She cocked her head at him as they hit the floor, her gaze challenging.

He ran a foot up her calf. "That won't be...difficult." He smiled, avoiding the obvious pun.

"Well?" Her eyes met his, challenging. "Aren't you going to...you know? With your hands?"