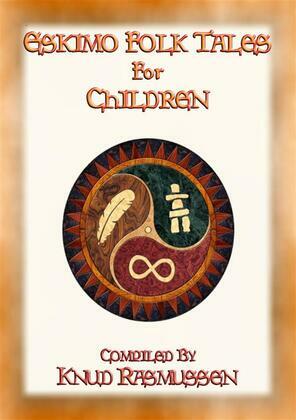 THE 53 ESKIMO, OR INUIT, folk tales contained herein were collected in various parts of Greenland, and recorded directly from the lips of the Inuit(Eskimo) story-tellers by Knud Rasmussen [1879 – 1933], a well-known Danish explorer; himself part Inuit/Eskimo.

Like most American Indian tales, these 53 stories are unlike any European märchen. There is no Puss in Boots, nor a Cinderella or a Snow White or Sleeping Beauty. Instead you will find unique stories and tales that the Inuit used to teach their children the moral lessons of life. These stories were usually told around a campfire with great effect. Tales like:

The Insects That Wooed A Wifeless Man,

The Raven And The Goose,

How The Fog Came,

The Giant Dog and many more.

The constellation of the Great Bear is explained in one story as is the origin of Venus in another. There is a version of the Bluebeard theme in imarasugssuaq, "who, it is said, was wont to eat his wives." Instances of friendship and affection between human beings and animals are found, as in the tale of the Foster-Mother And The Bear.

Fairy tales are common in all cultures worldwide. A test of how good they are is easily fulfilled by demands for another, usually by a little-one tugging at your sleeve and coyly begging for “’nutther ple-e-e-se,” and this book has many of these.

The 12 grey scale illustrations are by native Inuits (Eskimos) artists are not drawn to illustrate the particular stories, but represent typical scenes such as they are described.

As regards their contents, the stories present, more clearly, perhaps, than any objective study, the daily life of the Eskimos of old, their habit of thought, their conception of the universe, and the curious "spirit world" which formed their religion and mythology. In point of form they are refreshingly unique and highly enjoyable.

10% of the profit from the sale of this book will be donated to charities.