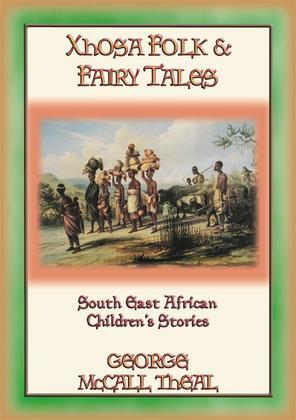 Xhosa Folk & Fairy Tales contains 21 Xhosa folk and fairy tales for children plus a section on the Proverbs and Figurative Expressions of the Xhosa. Nelson Mandela, Madiba, was a Xhosa and these are the stories he would have been told as a boy.

The Story of Long Snake

The Story of The Wonderful Horns

The Story of The Glutton

The Story of The Great Chief Of The Animals; to name but a few.

Like Native Americans and most other African folk and fairy stories, each story carries a moral as they were used to teach children the morals and lessons they would carry with them through life. Despite this, they are also extremely amusing and entertaining.

But the tribes of South Eastern Africa were not as isolated as many would think. Long before the Europeans arrived on the coast of South East Africa, Indians and Arabians had been trading regularly along this coast, mostly for gold and slaves and often venturing far inland to obtain either or both.

There was also frequent contact with, at least, the neighbouring tribes of the Bechuana, the Zulu, the Sotho, the Qwa Qwa and the Gariep. Indeed, many locally crafted items found their way North to the ancient city-state of Great Zimbabwe, some even making it as far afield as India and Arabia.

In the days long before Radio, TV and the Internet, many a traditional story would have been shared around a blazing campfire and it is with this mix of Indian, Arabian and inter-tribal African cultures that stories, or fragments of stories, would have been swapped with the peoples they met. So, if one of these stories should ring with familiarity, you don’t have to look far to find the reason for it.