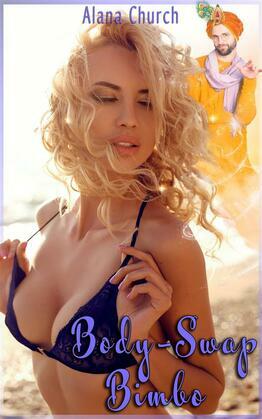 Milo was convinced life would be easier if he were a woman. When he woke up one morning to find his wish granted, he couldn't believe his good luck. As "Silly Millie," she is going to get all the sex she can with her gorgeous new body, whether it's from the hunky cop who wants to give her a parking ticket, the handsome bartender, or even her own roommate! Because Millie is a "Body-Swap Bimbo!"

She gave it a minute, then put her drink down and headed towards the hall, as if she were going to visit the bathroom. Just before she could get there, however, she found herself intercepted by Poppy.

"Hey, Millie!" She smiled, clearly in her element. "I want you to meet some of the girls. This is Jessica, and Kaylee, and Dawn."

The three young women nodded at her, their smiles curiously friendly. And with just a hint of the predatory gleam which Carla had shown.

"Nice to meet you," she said in a rush. "I'll be right back," she added, bouncing a bit on her toes. "But my bladder is about to explode, okay? I don't want to start doing the potty dance like a little kid."

The girls laughed and let her go. Hoping that her intent wasn't written in great big letters on her face, Millie turned into the hallway. Just as she reached the door on the left, it opened a crack, and Danny looked out. With a glance over her shoulder to make sure no one was watching, she slipped inside.

And then Millie was all over him, the dam of her self-control bursting under the onslaught of desire which she had been trying to hold in check all day. One arm wrapped around his waist, her hand feeling for his rear. The other reached up and tugged his mouth down.

"I'm not waiting," she panted, when she finally tore her lips away. "I've been wanting to get laid all day, and Danny, you just drew the lucky number."

"I did? What? Wait!" he said, his voice sliding upwards into panic as she fumbled at his belt and the button of his slacks. "I don't even know you!"

"Well, if we took the time to get to know each other," Millie said in what she thought was a reasonable tone, "we wouldn't have time to do anything else before your break was over. So what's it going to be? Sit here and talk? Or have sex now, and then meet up sometime tomorrow?"