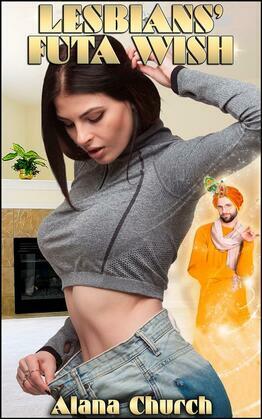 Judy and Pam are lesbians who have a naughty desire. Pam wants to be taken like a man. But the strap-on they bought isn't doing the job.

Enter Gene! The magical genie turns Judy into a sexy futa-woman! But can she overcome her surprise at her hot, throbbing passion and use it to give Pam the completion she craves? Find out in "Lesbians' Futa Wish"!

Her eyebrows lifted as she took in the length of her lover's body. Something was just a bit...off. Under the long t-shirt she had worn to bed, there was a strange, unidentifiable...lump...in the general vicinity of her crotch.

Pam put her hand over her mouth to stifle a laugh. She hadn't, had she? It was so like her girlfriend to refuse to admit defeat. For some reason, Judy must have decided to give the strap-on another try, and had put it back on. And had then fallen asleep. Did she think that having it on would allow her to get used to it? Did she think that a long, slow lovemaking session might get them both to the point where they would both get the pleasure they wanted out of the toy?

Well, if she wants to give it another shot, I'll try, she thought, as she climbed back into bed. Maybe it wasn't really too big. She lay propped on one elbow, looking down into the face of her beloved. Poor kid. She must have gotten up earlier this morning, while I was still asleep, and put the dang thing on. And then fell asleep waiting for me to wake up.

She leaned down, her lips brushing one soft cheek, while her hand reached down to flip up the hem of Judy's shirt.

And then lay stock-still, her eyes staring at what her hands had revealed.

Instead of the complicated mass of straps and buckles she had expected to see, with the lilac-colored phallus of the strap-on fastened over Judy's crotch, instead there was this...miracle.

She reached out, her fingers aching to touch it, to see if it was real, and not just a dream, and then pulled back. Instead, she leaned closer to inspect the-

-undeniably erect object that leaped up from her lover's groin like a dream made flesh. Long, thick, and tumescent, but still smaller than the monstrosity that their overeager libidos had insisted they get with the strap-on, it emerged from a spot just above Judy's cleft, its thickness merging with her skin. Thankfully, the arcane blessing that had bestowed it on her lover had seen fit to leave out some of the more unpleasant parts of the male anatomy. There was no unpleasant, wiry clump of pubic hair; no gross, sagging scrotum; no lumpy set of testes to mar her girlfriend's beauty. Only a lovely, lovely phallus, bobbing just a bit, in time with her heartbeat. Peachy-pink in color at the base, shading to a dark magenta at the tip, which was just slightly wet, a trace of clear fluid leaking from the tip.

She had to touch it. Had to make sure that her staring eyes weren't playing tricks on her, that she wasn't hallucinating. Biting her lip, she reached out, running one finger along the side of the shaft.