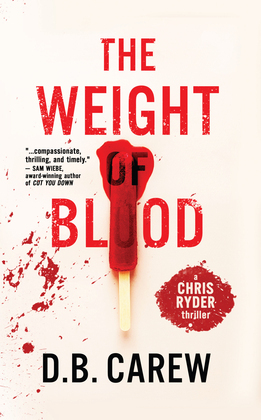 The Weight of Blood

by D.B. Carew (Author)
Buy for $11.99 Excerpt
Fiction Mystery & detective English literature American and Canadian literature
warning_amber
One or more licenses for this book have been acquired by your organisation details

After barely surviving the events of The Killer Trail, Vancouver psychiatric social worker Chris Ryder once again finds himself at the centre of a high-profile murder case: Marvin Goodwin, a young man who falls on the extreme end of the autism spectrum, is found covered with blood at the murder scene of a local ice cream truck driver. When Chris is called in to learn what he can about Marvin, he finds that the weight of blood might just be too much for him to bear.

Complicating matters are Chris' strained relationship with his father; the vicious actions of his half-brother, Ray; the blinding spotlight of the media; and the aftereffects of trauma. In The Weight of Blood, D.B. Carew has given us a protagonist who is trying to hold everything together while staunching blood that both spills and connects.