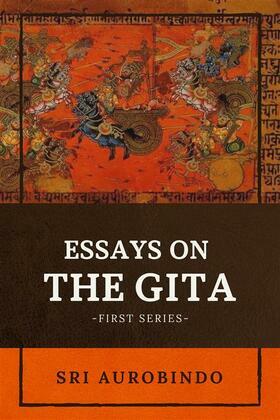 Essays on the GITA

by Sri Aurobindo (Author)
Buy for €3.49 Excerpt
Nonfiction Human science Philosophy Hindu Religion Hinduism
warning_amber
One or more licenses for this book have been acquired by your organisation details

“This is the deepest and most intimate truth of your real, your spiritual existence.”

Bhagavad Gita, also simply known as The Gita, is one of the most sacred Scriptures in the world. This philosophical poem focuses on a conversation between the Pandava prince Arjuna and the Beloved Lord Krishna, an Avatar of the god Vishnu. They converse about a variety of theological and philosophical issues (wisdom, devotion, self-knowledge, self-realization, ego, inner power, karma and dharma…). Sri Aurobindo was an Indian philosopher, yogi, guru, poet. He developed a spiritual practice he called Integral Yoga. In this masterful study of the Bhagavad Gita, Sri Aurobindo explained the spiritual realization that not only liberated but transformed human nature, enabling a divine life on earth. The main objective of his teachings was to increase the level of consciousness of people and to aware people of their true selves. This book is a synthesis of many of the most important Indian spiritual philosophies, and is by far the most relevant to modern humanity and the most inspiring to westerners.

EXCERPT : The symbolic companionship of Arjuna and Krishna, the human and the divine soul, is expressed elsewhere in Indian thought, in the heavenward journey of Indra and Kutsa seated in one chariot, in the figure of the two birds upon one tree in the Upanishad, in the twin figures of Nara and Narayana, the seers who do tapasy? together for the knowledge. But in all three it is the idea of the divine knowledge in which, as the Gita says, all action culminates that is in view; here it is instead the action which leads to that knowledge and in which the divine Knower figures himself. Arjuna and Krishna, this human and this divine, stand together not as seers in the peaceful hermitage of meditation, but as fighter and holder of the reins in the clamorous field, in the midst of the hurtling shafts, in the chariot of battle. The Teacher of the Gita is therefore not only the God in man who unveils himself in the word of knowledge, but the God in man who moves our whole world of action, by and for whom all our humanity exists and struggles and labours, towards whom all human life travels and progresses. He is the secret Master of works and sacrifice and the Friend of the human peoples.