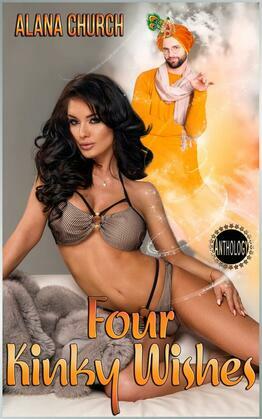 Brendan watched Miranda as she bent to the ground again, then crawled in search of new prey. Her tight gray shorts clung to the taut curves of her rear, and her legs, tanned a light gold, caught the light of the late-May sun.

Damn, she's hot. Over the weekend, he had slowly become aware of his growing desire for her. Part of him knew he shouldn't be feeling the urges that were swelling inside him. But the warning voice had grown fainter and fainter, like a dream that faded beyond recall once he woke. Unconsciously, his hand slipped inside the pair of old sweats he was wearing, watching the gorgeous woman as she weeded, unaware of his attention. That moment last night, when he had knelt like a supplicant at her feet, was seared in his memory. He had been so close, so close to trying to make a move on her. Only some tiny fragment of self-preservation had kept him from planting a kiss on Miranda's crotch, instead turning it into a raspberry on her stomach.

Oh, but it could have been so sweet. If he had dared. If he had found the courage. His manhood swelled, filling his hand, as he gazed at her small, trim body. Not as busty as some. But he had never been attracted to women with breasts the size of cantaloupes. In his eyes, her slim, petite body was perfection. And that view had only been enhanced the previous evening. He wondered if she had felt the same siren song of attraction he had, if her body responded to his in the same way.

God. He was so hard now that he was aching. A sudden mad urge filled him. To slip down his shorts and stroke himself to release right there. But then she stood, brushed off her hands, slipped the screwdriver into a back pocket, and headed towards the door. Feeling like a kid who was about to get caught stealing from the cookie drawer, he jerked his hand out of his sweats as she slid the patio door open.

"Have fun weeding?" he asked with a smile.

"You know, you're never going to get them all," she replied. "That's what old Miss Phelps down the street used to tell me when I first bought the place. I'm not trying to win. Just fight them to a draw." Her eyes strayed to his crotch, then back up to his face, her lips curling in an amused smile. "Good movie?" she asked.

He found his face heating. It wasn't every woman who would remark, no matter how obliquely, on a man's erection. "It was at a sexy bit," he stammered.

"Oh, yes," she agreed cheerfully, and glanced at the television. "I always thought the prison shower scene in Shawshank was sexy as hell. Or maybe it was something else that got your motor running?

"I'm going to go clean up," she added, sauntering away. A look over her shoulder showed him her mouth, curled in a smile that made his heart skip.

"Try not to think too much about me when I'm gone. I would hate for you to have an...accident."