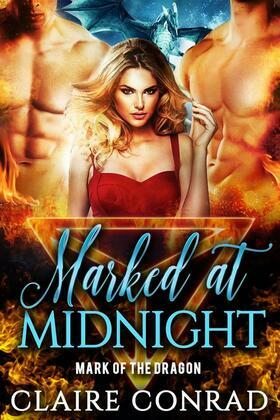 Marked at Midnight: Mark of the Dragon, Book 1

by Claire Conrad (Author)
Buy for €3.99 Excerpt
Fiction Romance Paranormal Fantasy
warning_amber
One or more licenses for this book have been acquired by your organisation details

When the nearly identical hunks of male perfection walk into the restaurant where Brittany works, she absolutely, positively does not expect them to glance her way.

They don't just glance, they stare.

She does not expect a proposition so hot she can barely believe it. Still, she accepts. Eagerly.

And one night of passion ruins her for every other man on the planet.

She can't stop thinking about them.

But they aren't what they seem.

They're not human, but Dragon and Rider.

They live to protect humanity. To protect life.

But war is brewing...

Brittany soon finds herself not just giving them her heart,

but in the middle of a war she can't possibly understand.

And her love is the key to not only her survival but theirs.

To the survival of the entire world.