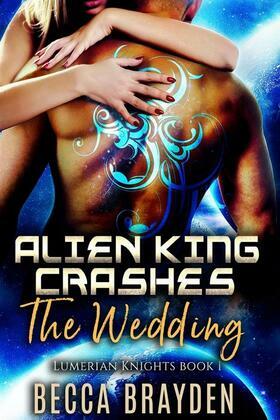 by Becca Brayden (Author)
Buy for €4.99 Excerpt
Fiction Romance Paranormal
warning_amber
One or more licenses for this book have been acquired by your organisation details

Art dealer Sasha Montgomery is both nervous and thrilled to be invited to the Caldorian Earth Base for her best friend’s wedding to an alien warrior. One, she’s never seen an alien up close, and two, she made a promise to be there, no matter how much the idea of being surrounded by hundreds of huge alien warriors frightens her.

She thinks she’s got it all under control, until Dagan, the groom’s best friend, crashes the wedding. He’s smoking hot—way too hot to be an alien—and determined to seduce her.

Sasha gives in to passion with unexpected consequences. Ancient power rises in response to their new-found bond, and the once innocent Sasha discovers that Dagan has been keeping secrets. He’s not just another warrior, he’s a king, and the power rising between them hasn’t been seen in a millennium.

Sasha must learn to control the force clawing its way through her body…or destroy them all.