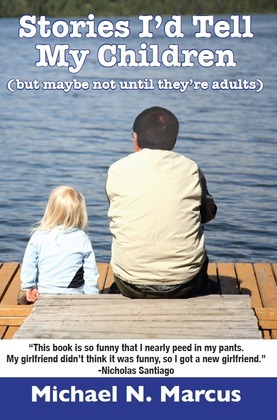 Stories I'd Tell My Children (But Maybe Not Until They're Adults)

Stories I'd Tell My Children (but maybe not until they're adults) is mostly hysterically funny, sometimes poignant and profound, often bawdy and always delightful.

The book includes more than 100 stories that span 55 years: pre-school, in school, and after the author had enough school. There's lots of sex, drugs and rock & roll. Even the sex and drug stories are funny.

Some stories were written as revenge against bad teachers, evil bosses and crazy clients. There are stories about weird relatives, weird food, women the author considered marrying, and the woman he did marry. You'll even learn what his wife had to do in bed to defeat the competition.

Although Michael N. Marcus is a first-year baby-boomer who grew up in the 1950s and 1960s, "This book provides a hilarious look at life for people of all ages who want to roll on the floor, laughing until the tears come." Another reviewer said, "This book is so funny that I nearly peed in my pants. My girlfriend didn't think it was funny, so I got a new girlfriend."

In addition to laughter, the book provides an education. One chapter helps women understand the male fascination with farts and breasts. Another explains how Betty Friedan and Anthony Quinn made 1965 much sexier than 1964.

Other chapters explain the difference between New York and Connecticut mommies, the connection between Sigmund Freud and Groucho Marx, how baseball can be child abuse, how oral sex can be dangerous, what boys don't know about jockstraps and childbirth, the meaning of "In-A-Gadda-Da-Vida," the disgusting secret ingredients in the world's greatest coleslaw, how a free dog can cost $100,000, and how the author conducted a test to determine if he attracted crazy women or drove women crazy.