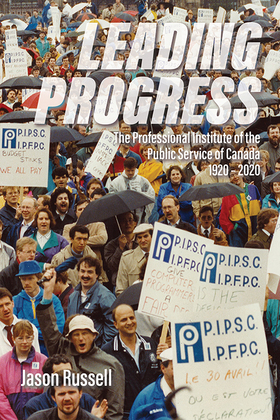 On February 6, 1920, a small group of public service employees met for the first time to form a professional association. A century later, the Professional Institute of the Public Service Canada (PIPSC) is a bargaining agent representing close to 60,000 public sector workers, whose collective efforts for the public good have touched the lives of every Canadian.

Published on the centennial of PIPSC’s founding, Leading Progress is the definitive account of its evolution from then to now—and a rare glimpse into an under-studied corner of North American labour history. Researcher Dr. Jason Russell draws on a rich collection of sources, including archival material and oral history interviews with dozens of current and past PIPSC members. The story that unfolds is a complex one, filled with success and struggle, told with clarity and even-handedness.

After decades of demographic and generational shifts, economic booms and busts, and political sea change, PIPSC looks toward its next hundred years with its mission as strong as ever: to advocate for social and economic justice that benefits all Canadians.