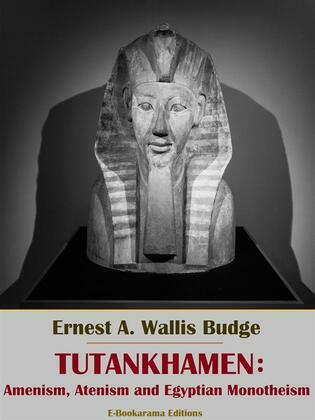 by Ernest A. Wallis Budge (Author)
Buy for €0.49 Excerpt
Nonfiction History Ancient Egypt Biography & autobiography Religious History by country Middle East Egypt Religion
warning_amber
One or more licenses for this book have been acquired by your organisation details

First published in 1923, "Tutankhamen: Amenism, Atenism and Egyptian Monotheism" is a collection of essays and translations by Ernest A. Wallis Budge about the 18th dynasty of Ancient Egypt, particularly Amenhotep IV, who attempted to impose a monotheistic religion on the Egyptians, and Tutankhamen, who led a counter-reformation.

"Tutankhamen: Amenism, Atenism and Egyptian Monotheism" appears to have been pieced together from existing material, shortly after the sensational discovery of Tutankhamen's intact tomb. If you are looking for a lengthy biography of 'King Tut', or an inventory of the riches of his tomb you will be disappointed. Most of this book is about Amenhotep IV, particularly his abortive attempt to negate thousands of years of Egyptian polythesism, and replace it with a monotheistic religion. This is a fascinating subject for students of the history of religion, and Budge offers a set of key source documents on the topic, as well as some insightful analysis.