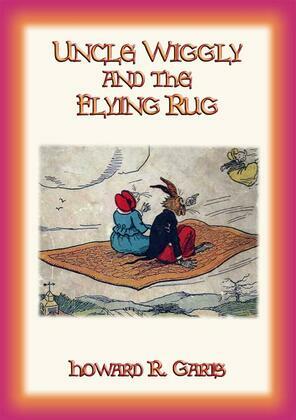 UNCLE WIGGILY and the FLYING RUG is one of many Uncle Wiggily picture books by Howard Garis and contains 3 action-packed children’s stories with 29 colourful illustrations.

UNCLE WIGGILY is an engaging elderly rabbit and is lame from rheumatism. Wherever he goes, he always relies on a red, white, and blue crutch—described as being "striped like a barber-pole", or, in later episodes, "his candy-striped walking cane", with spiral red and white striping like a peppermint candy stick.

The stories in this volume are

As with everything Uncle Wiggily gets involved in, it ends in a colourful and engaging adventure.

Each story is short enough to be read to 3 to 5 year olds at bed time with bright, colourful images to keep children engaged throughout the story with a picture per page. How could you deny your children a story for just 33c

UNCLE WIGGILY LONGEARS is the main character of a series of children's stories by American author Howard R. Garis. He began writing the stories for the Newark News in 1910. He then penned an Uncle Wiggily story every day (except Sundays) for more than 52 years, and published 79 books in his lifetime. According to his obituary in the Chicago Tribune, “a walk in the woods in Verona, New Jersey was his inspiration.”