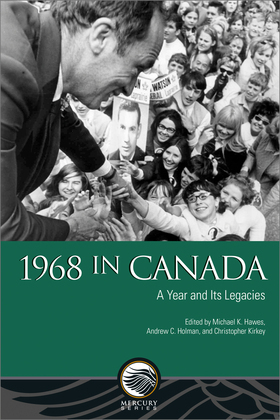 by Michael K. Hawes (Editor), Andrew C. Holman (Editor), Christopher Kirkey (Editor)
Buy for $23.99 Excerpt
Nonfiction History History by country Canada
warning_amber
One or more licenses for this book have been acquired by your organisation details

The year 1968 in Canada was an extraordinary one,
unlike any other in its frenetic pace of activities and
their consequences for the development of a new
national consciousness among Canadians.

It was a year when decisions and actions, both in
Canada and outside its borders, were thick and
contentious, and whose effects were momentous and
far-reaching. It saw the rise of Trudeaumania and the
birth of the Parti Québécois; the articulation of the
new nationalism in English Canada and an alternative
vision for Indigenous rights and governance; a series of
public hearings in the Royal Commission on the Status
of Women; the establishment of the Canadian Radio
and Television Commission, nation-wide Medicare and
CanLit; and a striving for both a new relationship with
the United States and a more independent foreign
policy everywhere else. And more. Virtually no segment
of Canadian life was untouched by both the turmoil
and the promise of generational change.

Published in English with chapters in French.