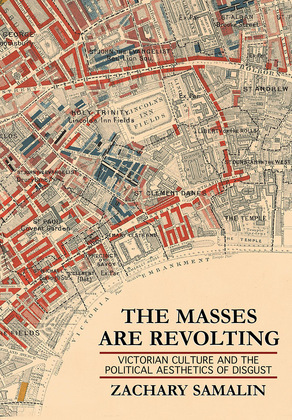 The Masses Are Revolting

Victorian Culture and the Political Aesthetics of Disgust
by Zachary Samalin (Author)
Buy for $20.99 Excerpt
Nonfiction Human science Psychology Emotions
warning_amber
One or more licenses for this book have been acquired by your organisation details

The Masses Are Revolting reconstructs a pivotal era in the history of affect and emotion, delving into an archive of nineteenth-century disgust to show how this negative emotional response came to play an outsized, volatile part in the emergence of modern British society. Attending to the emotion's socially productive role, Zachary Samalin highlights concrete scenes of Victorian disgust, from sewer tunnels and courtrooms to operating tables and alleyways. Samalin focuses on a diverse set of nineteenth-century writers and thinkers—including Charles Darwin, Charles Dickens, Karl Marx, Friedrich Engels, Thomas Hardy, George Gissing, and Charlotte Brontë—whose works reflect on the shifting, unstable meaning of disgust across the period.

Samalin elaborates this cultural history of Victorian disgust in specific domains of British society, ranging from the construction of London's sewer system, the birth of modern obscenity law, and the development of the conventions of literary realism to the emergence of urban sociology, the rise of new scientific theories of instinct, and the techniques of colonial administration developed during the Indian Rebellion of 1857. By bringing to light disgust's role as a public passion, The Masses Are Revolting reveals significant new connections among these apparently disconnected forms of social control, knowledge production, and infrastructural development.