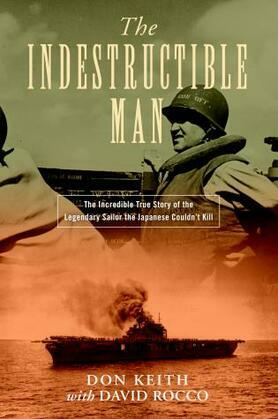 Dixie Kiefer’s reputation for durability began at the U.S. Naval Academy, where he broke an ankle and shattered a kneecap while playing football. After anti-submarine duty in World War I, he became a pioneer of naval aviation and had an elbow shattered by a plane that buzzed him as a joke. Kiefer’s first World War II assignment was executive officer of the carrier Yorktown. He earned the Distinguished Service Medal at the Coral Sea and the Navy Cross at Midway, where—as his ship was sinking—he suffered severe burns to his hands and a compound fracture of his foot. After recuperating, Kiefer took command of the Ticonderoga. In January 1945, Japanese kamikazes struck the carrier, killing and wounding hundreds. Kiefer broke his arm and was struck by more than sixty pieces of shrapnel—but remained on the bridge for twelve hours, earning the Silver Star. Victim of ten wounds in two wars, veteran of some of the U.S. Navy’s most celebrated carriers and battles, a naval aviation pioneer, Dixie Kiefer died in a stateside plane crash two months after the war ended.