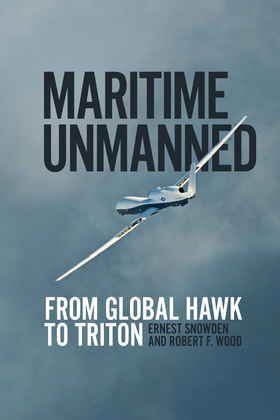 by Ernest Snowden (Author), Robert F. Woods (Author)
Buy for $37.95 Excerpt
Nonfiction History History by country United States Other Military
warning_amber
One or more licenses for this book have been acquired by your organisation details

Maritime Unmanned recounts the promising beginning, demoralizing setbacks, and ultimate success of the visionaries who championed unmanned aircraft systems (UAS) technology for the U.S. Navy.Even before UAS entered the common vernacular of American defense programs, large movements in world and national politics from the early 1990s onward had a formative influence on what would become the Air Force’s Global Hawk. From that earliest time, through the formal selection of Triton as the U.S. Navy’s preferred UAS system in 2008, Maritime Unmanned reveals the successesand difficult challenges in defense acquisition.This was the first time in the history of naval aviation that an unmanned aerial vehicle was adopted into frontline squadron inventories and was in this instance an enabling component of the maritime patrol and reconnaissance mission. What should have been a simple cross-service transition of a DARPA and Air Force–developed UAS (Global Hawk) took twenty years from introduction of the concept to realization of its initial operational capability.

Ernest Snowden and Robert F. Wood dive deep inside the machinations of aerospace and defense industry leadership, strategy development, and execution. They describe the process industry representatives and Navy counterparts took to develop and socialize an unfamiliar and unconventional concept of operations in their effort to cultivate adoption of the technology by the U.S. Navy; and they reveal the motivations of senior government acquisition officials, who either advocated for the concept or purposely road-blocked its advancement.