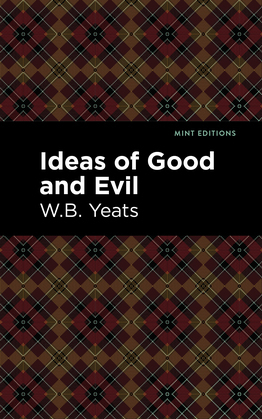 Ideas of Good and Evil

by William Butler Yeats (Author)
Buy for $8.99 Excerpt
Nonfiction Literary collections English, Irish, Scottish, Welsh Essays Literary essays
warning_amber
One or more licenses for this book have been acquired by your organisation details

Ideas of Good and Evil (1903) is a collection of wide-ranging essays by Irish poet W.B. Yeats. Writing on such subjects as the art of poetry, politics, and the occult, Yeats proves himself to be not only a master of verse and drama, but an immensely talented essayist and thorough scholar.

“What is ‘Popular Poetry’?” reflects on a changing Irish literary landscape which has, over the course of Yeats’ career, established its own place in world literature apart from, and perhaps surpassing, its English counterpart. Juxtaposing “the poetry of the coteries, which presupposes the written tradition” and “the true poetry of the people, which presupposes the unwritten tradition,” Yeats argues that the spirit of Irish poetry depends on its unfaltering connection to the itinerant bards and storytellers whose gift for musicality and memory kept language alive for a widely illiterate people. In “Magic,” Yeats, a longtime member of the Hermetic Order of the Golden Dawn, discusses his belief in the occult. Musing on the power of symbol to evoke memories, as well as the revelation of his past lives, Yeats provides personal anecdotes and secondhand accounts of magical occurrences and experiences, exposing a world secrets and hidden meaning for believers and the uninitiated alike. “The Philosophy of Shelley’s Poetry” is an academic essay in which Yeats argues that Shelley’s poems far surpass the radical ideologies of such figures as William Godwin. Ideas of Good and Evil showcases the diverse intellectual and spiritual interests of W.B. Yeats, an icon of Irish literature and one of the twentieth century’s leading poetic voices.

With a beautifully designed cover and professionally typeset manuscript, this edition of W.B. Yeats’s Ideas of Good and Evil is a classic of Irish literature reimagined for modern readers.