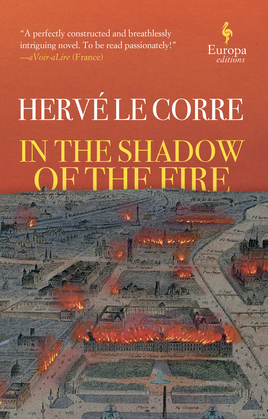 In the Shadow of the Fire

by Herve Le Corre (Author), Tina Kover (Translator)
Buy for $14.99 Excerpt
Fiction Mystery & detective Historical Francophone literature
warning_amber
One or more licenses for this book have been acquired by your organisation details

Winner of the French Voices Prize, In the Shadow of the Fire traces the Paris Communards’ tragic odyssey, while following a breathless criminal investigation.

In 1871, the Paris Commune’s “bloody week” sees the  savage climax of the clashes between the Communards and the French Armed Forces loyal to Versailles. Amid the shrapnel and the chaos, while the entire west side of Paris is a field of ruins, a photographer fascinated by the suffering of young women takes “suggestive” photos to sell to a particular clientele.

Then young women begin disappearing, and when Caroline, a seamstress who volunteers at a first aid station, is counted among the missing, her fiancé Nicolas, a member of the Commune’s National Guard, and Communal security officer Antoine set off independently in search of her. Their race against the clock to find her takes them through the shell-shocked streets of Paris, and introduces them to a cast of fascinating characters.