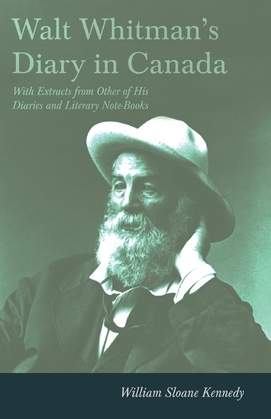 Contained within the pages of this rare book is a collection of writings taken from Walt Whitman’s diaries and note-books written during his time in Canada. A keen woodsman with a passion for the outdoors, the literature contained herein was diligently transcribed for its original publication from ‘out-door notes’ composed on worn and time-stained fragments of paper by its editor, William Sloane Kennedy. A fascinating read, this book offers a unique insight into the mind of this great man and is an absolute must-read for lovers of Whitman.
Walter "Walt" Whitman (1819 - 1892) was a celebrated American poet, essayist and journalist. He is one of the most influential poets in American literature and is often referred to as the father of free verse. He is most famous for his seminal poetical work ‘Leaves of Grass’ and he was hailed by D. H Lawrence as “the greatest modern poet” and “the greatest American”. This rare book is proudly republished now with an introductory biography of the author.