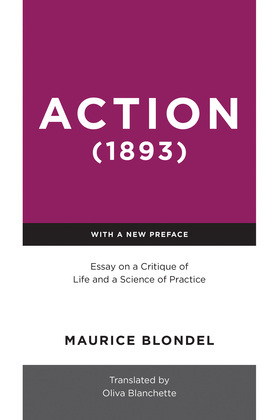 Essay on a Critique of Life and a Science of Practice
by Maurice Blondel (Author), Oliva Blanchette (Translator)
Buy for $39.99 Excerpt
Nonfiction Religion Catholic Human science Philosophy Religious
warning_amber
One or more licenses for this book have been acquired by your organisation details

This new edition of the English translation of Maurice Blondel’s Action (1893) remains a philosophical classic.

Action was once a common theme in philosophical reflection. It figured prominently in Aristotelian philosophy, and the medieval Scholastics built some of their key adages around it. But by the time French philosopher Maurice Blondel came to focus on it at the end of the nineteenth century, it had all but disappeared from the philosophical vocabulary. Today, it is no longer possible or legitimate to ignore action in philosophy as it was when Blondel defended and published his doctoral dissertation and most influential work, L’Action: Essai d’une critique de la vie et d’une science de la pratique (1893). Oliva Blanchette’s definitive English translation of Action was first published in 1984 to critical acclaim. This new edition contains Blanchette’s translation, corrections of minor errors in the first edition, and a new preface from the translator, describing what makes this early version of Action unique in all of Blondel’s writings and what has kept it in the forefront of those interested in studying Blondel and his philosophy of Christian religion. Action (1893) will appeal to philosophers, theologians, and those looking for spiritual reading, and it is an excellent study in reasoning for the more scientifically inclined.