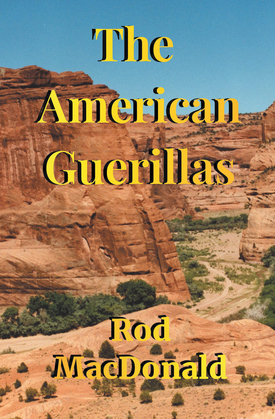 by Rod Macdonald (Author)
Buy for $3.99 Excerpt
Fiction Fantasy Contemporary & supernatural fantasy
warning_amber
One or more licenses for this book have been acquired by your organisation details

From its pastoral opening to its concluding serenade, The American Guerillas treats the reader to exciting episodes of romance, police chases, individual confrontations, and military camaraderie. Yet, above all, it?s a story of lovers who must risk everything to solve a mystery if they are to have a chance at staying together.

A love letter to the genre of magic realism, this book vividly entertains with time travel, the tarot, and Native American spirituality, mixing a love story with a crime narrative. Originally begun nearly four decades ago, The American Guerillas is the second published novel by Rod MacDonald.

During the decades between the book?s origin and its publication, MacDonald became best known as a singer/songwriter and interpreter of American song, as well as a lecturer on music history at Florida Atlantic University. He has released thirteen solo albums and achieved prominence as a writer, performer, and educator. MacDonald now lives in Delray Beach, Florida, with his wife and their two children.