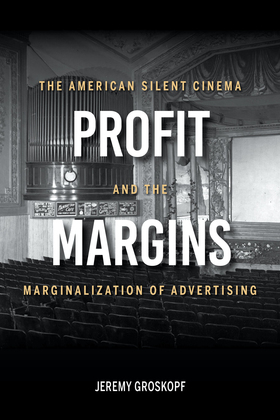 The American Silent Cinema and the Marginalization of Advertising
by Jeremy Groskopf (Author)
Buy for $29.99 Excerpt
Nonfiction Arts Film & video History & criticism Social science Media studies Business & economics Advertising & promotion
warning_amber
One or more licenses for this book have been acquired by your organisation details

Between the advent of print advertising and the dawn of radio came cinema ads. These ads, aimed at a captive theater audience, became a symbol of the developing binary between upper-class film consumption and more consumerist media.

In Profit Margins, Jeremy Groskopf examines how the ad industry jockeyed for direct advertisement space in American motion pictures. In fact, advertisers, who recognized the import of film audiences, fought exhibitors over what audiences expected in a theater outing. Looking back at these debates in four case studies, Groskopf reveals that advertising became a marker of class distinctions in the cinema experience as the film industry pushed out advertisers in order to create a space free of ads. By restricting advertising, especially during the rise of high-class, palatial theaters, the film industry continued its ongoing effort to ascend the cultural hierarchy of the arts.

An important read for film studies and the history of marketing, Profit Margins exposes the fascinating truth surrounding the invention of cinema advertising techniques and the resulting rhetoric of class division.