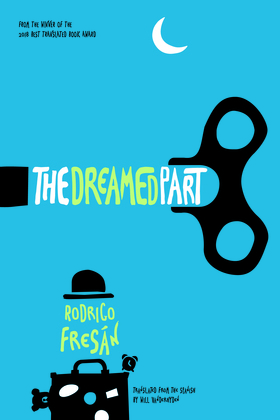 by Rodrigo Fresán (Author), Will Vanderhyden (Translator)
Buy for $15.95 Excerpt
Fiction Literary Nonfiction Biography & autobiography Literary History
warning_amber
One or more licenses for this book have been acquired by your organisation details

Following his failure to break into the Hadron Collider and merge with the so-called “God particle,” The Writer from The Invented Part can no longer write or sleep. Instead, he lies awake, imagining and reimagining key moments of his life, spinning out a series of insomniac visions every bit as thought-provoking as they are dreamlike. A mysterious foundation dedicated to preserving dreams, suddenly invaluable in the wake of the dream-eradicating White Plague; a psycho-lyrical-photophobic terrorist; an electric and mercurial lullaby; three lunatic sisters (and an eclipsed brother) who write from the darkest side of the most wuthering lunar heights; a hallucinating prisoner and a hallucinatory family; a genius addicted to butterflies and an FBI agent addicted to that genius; a looney and lysergic uncle and parents who model but are not model parents; a revolutionary staging of Shakespeare for the children of chic guerrillas; a city of sleepless bookshops; and a writer who might be 100 years old. Or not.

With characteristic wit, careening style, and array of cultural references, high and low and everything in between—from Shakespeare, the Brontë sisters, and Vladimir Nabokov to Talking Heads, superhero movies, and Rick and Morty—the second volume of Fresán’s trilogy is one of the most ambitious, unique, and entertaining novels of our time.