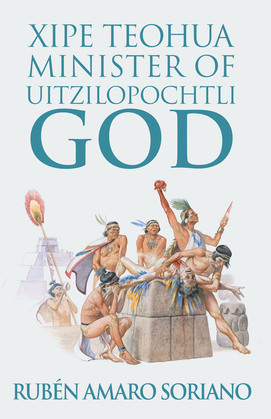 Teohua Minister of Uitzilopochtli god described in twenty-seven chapters the experiences of the soul of an Aztec boy, his education and his training as an assassin Aztec priest in his different reincarnations through time in the Aztec Empire. This story talks about the daily life and bloody festivities of the Aztecs, but mainly describes the abuses committed by the Aztec priests by sacrificing hundreds of thousands of people at the time of Teotihuacan and the great Tenochtitlan.
In the Twentieth century and by a twist of fate, this Aztec soul reincarnated in the body of a Mexican child of Jewish descent. The boys' father was one of the wealthiest landowners in the region of the Popocatepetl and Itztaccihuatl volcanoes.
On the other hand, the house that belonged to the child's father was built five hundred years before and had been inherited from generation to generation until the twentieth century. The house was constructed with the ruins of an Aztec temple dedicated to Omacatl reptile god, and for the Jewish boy, being born among those ruins tied him a course. Because during the Aztec Empire, children born only inside a temple could be Aztec priests.
The reason reincarnation was to continue with the most feared and respected profession of the Aztec Empire, that was to be an assassin Aztec priest.
Weeks before the fall of the Aztec Empire, the Aztec chief priests gathered in the Birds' Hall in the house of Emperor Moctezuma II. They had an agreement to keep secret the real existence of their Aztec reptilian gods and continue the sacrifices regardless of the historical era in which the descendants of the Aztecs lived. In that meeting, they promised, continued with the traditions of human sacrifices.
Then, it seems that the future of the Jewish boy without being descendent of the Aztec race was marked to be an assassin who was at the services of the Aztec reptilian gods.