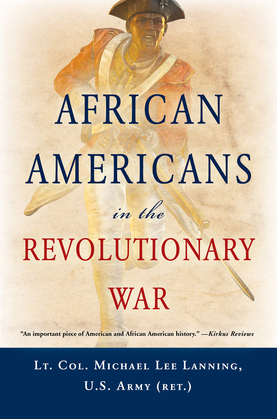 African Americans In The Revolutionary War

“A thorough, long-overdue study of Black Americans’ contributions during the War of Independence. . . . An important piece of American and African American history.”
—Kirkus Reviews

In this enlightening and informative work, military historian Lt. Col. Michael Lee Lanning (ret.) reveals the little-known, critical, and heroic role African Americans played in the American Revolution, serving in integrated units—a situation that would not exist again until the Korean War—more than 150 years later . . .

At first, neither George Washington nor the Continental Congress approved of enlisting African Americans in the new army. Nevertheless, Black men—both slave and free—filled the ranks and served in all of the early battles. Black sailors also saw action in every major naval battle of the Revolution, including members of John Paul Jones’s crew aboard the Bonhomme Richard. At least thirteen Black Americans served in the newly formed U.S. Marine Corps during the war.

Bravery among African Americans was commonplace, as recognized by their commanders and state governments, and their bravery is recorded here in the stories of citizen Crispus Attucks at the Boston Massacre; militiaman Price Esterbrook at Lexington Green; soldier Salem Poor at Bunker Hill; and marine John Martin aboard the brig Reprisal.

As interest in colonial history enjoys renewed popularity due to works like Hamilton, and the issues of prejudice and discrimination remain at the forefront of our times, African Americans in the Revolutionary War offers an invaluable perspective on a crucial topic that touches the lives of Americans of every color and background.