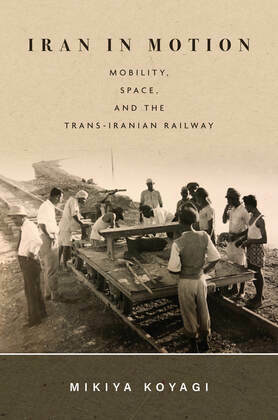 Mobility, Space, and the Trans-Iranian Railway
by Mikiya Koyagi (Author)
Buy for $65.00 Excerpt
Nonfiction History 1945-1989 Social science Transportation Railroads History
warning_amber
One or more licenses for this book have been acquired by your organisation details

Completed in 1938, the Trans-Iranian Railway connected Tehran to Iran's two major bodies of water: the Caspian Sea in the north and the Persian Gulf in the south. Iran's first national railway, it produced and disrupted various kinds of movement—voluntary and forced, intended and unintended, on different scales and in different directions—among Iranian diplomats, tribesmen, migrant laborers, technocrats, railway workers, tourists and pilgrims, as well as European imperial officials alike. Iran in Motion tells the hitherto unexplored stories of these individuals as they experienced new levels of mobility.

Drawing on newspapers, industry publications, travelogues, and memoirs, as well as American, British, Danish, and Iranian archival materials, Mikiya Koyagi traces contested imaginations and practices of mobility from the conception of a trans-Iranian railway project during the nineteenth-century global transport revolution to its early years of operation on the eve of Iran's oil nationalization movement in the 1950s. Weaving together various individual experiences, this book considers how the infrastructural megaproject reoriented the flows of people and goods. In so doing, the railway project simultaneously brought the provinces closer to Tehran and pulled them away from it, thereby constantly reshaping local, national, and transnational experiences of space among mobile individuals.