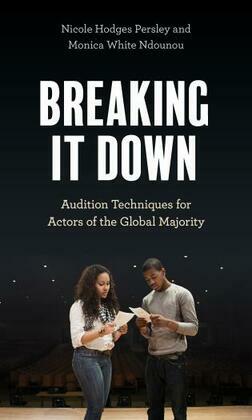 by Nicole Hodges Persley (Author), Monica White Ndounou (Author)
Buy for $28.50 Excerpt
Nonfiction Arts Performing arts Acting & auditioning
warning_amber
One or more licenses for this book have been acquired by your organisation details

A practical guide that shows BIPOC actors how to break down the audition process rather than being broken down by the entertainment industry and its practices of exclusion and bias.

Working in an environment that often stereotypes or attempts to “universalize” experiences, it’s more important than ever that actors consider how culture, race, ethnicity, gender, sexuality, and ability are inseparable and important parts of their identity that should not be minimized and can instead enhance their work. In Breaking It Down: Audition Techniques for Actors of the Global Majority, Nicole Hodges Persley and Monica White Ndounou share real-world audition strategies that centers the experiences of actors of color. They combine practical advice, cultural studies, Black feminist perspectives, and lived experiences to offer intersectional approaches to auditioning.

The ten steps outlined in this book aid actors across racial lines seeking to develop the necessary skills to break down a character and script while affirming their full selves into the audition to book the role. Building on the momentum of the #BlackLivesMatter, #MeToo, and Time’s Up movements, Breaking It Down emboldens actors of the global majority to embrace every aspect of their identities rather than leaving themselves behind in an effort to gain entry and access to the entertainment industry