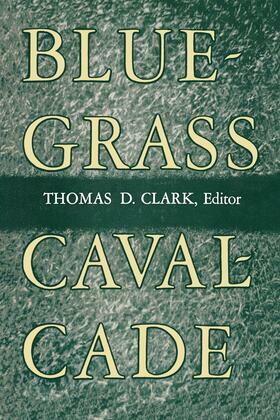 Kentucky history centers on the Bluegrass; this is not to say that the rest of Kentucky does not have a rich story, but chronologically, the beginning was here. Too, Bluegrass history can scarcely be separated from the rest of the state. Boonesboro and Harrodsburg, Henry Clay and Elizabeth Madox Roberts are the cherished possessions of all Kentuckians. Jane Todd Crawford and Dr. Ephraim McDowell stood in for humanity. It is a great matter of local pride that they did so in Kentucky.

Bluegrass Cavalcade brings together fifty-five Kentucky writers to write about their home state and to capture a taste of the rich regional flavor of the Bluegrass as an introduction to Kentucky history. Among the selections included in this volume is represented a small army of distinguished authors who have viewed Kentucky from various perspectives. Edited by revered state historian Thomas D. Clark, Bluegrass Cavalcade is meant to be a literary and historical reception where these esteemed Kentucky writers meet their readers.