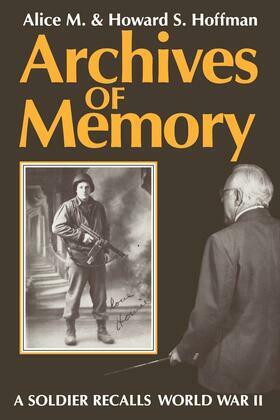 A Soldier Recalls World War II
by Alice M. Hoffman (Author), Howard S. Hoffman (Author)
Buy for $12.95 Excerpt
Nonfiction History Other Historiography History by country United States Other Military
warning_amber
One or more licenses for this book have been acquired by your organisation details

"Tell me about the war"—these words launched a ten-year project in oral history by a husband-and-wife team. Howard Hoffman fought in World War II from Cassino to the Elbe as a mortar crewman and a forward observer. His war experiences are of intrinsic interest to readers who seek a foot soldier's view of those historic events. But the principal purpose of this study was to explore the bounds of memory, to gauge its accuracy and its stability over time, and to determine the effects of various efforts to enhance it.

Alice Hoffman, a historian, initiated the study because she recognized the critical role of memory in gathering oral history; Howard Hoffman, the subject, is an experimental psychologist. Alice's tape-recorded interviews with her husband over a period of ten years are the basic material of the study, which compares the events as recounted in the first phase of the interviews with later accounts of the same experiences and with the written records of his company as well as the memories of fellow soldiers and the evidence of photographs and other documents.

This engrossing story of World War II breaks new ground for practitioners of oral history. The Hoffmans' findings indicate that a subset of human memory exists that is so permanent and resistant to change that it can properly be labeled "archival". In addition to describing some of the circumstances under which archival memories are formed, the Hoffmans describe the conditions that were found to influence their storage and retrieval.