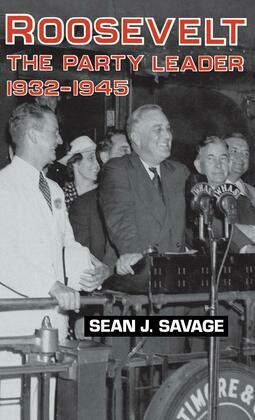 FDR—the wily political opportunist glowing with charismatic charm, a leader venerated and hated with equal vigor—such is one common notion of a president elected to an unprecedented four terms. But in this first comprehensive study of Roosevelt's leadership of the Democratic party, Sean Savage reveals a different man. He contends that, far from being a mere opportunist, Roosevelt brought to the party a conscious agenda, a longterm strategy of creating a liberal Democracy that would be an enduring majority force in American politics.

The roots of Roosevelt's plan for the party ran back to his experiences with New York politics in the 1920s. It was here, Savage argues, that Roosevelt first began to perceive that a pluralistic voting base and a liberal philosophy offered the best way for Democrats to contend with the established Republican organization. With the collapse of the economy in 1929 and the discrediting of Republican fiscal policy, Roosevelt was ready to carry his views to the national scene when elected president in 1932.

Through his analysis of the New Deal, Savage shows how Roosevelt made use of these programs to develop a policy agenda for the Democratic party, to establish a liberal ideology, and, most important, to create a coalition of interest groups and voting blocs that would continue to sustain the party long after his death. A significant aspect of Roosevelt's leadership was his reform of the Democratic National Committee, which was designed to make the party's organization more open and participatory in setting electoral platforms and in raising financial support.

Savage's exploration of Roosevelt's party leadership offers a new perspective on the New Deal era and on one of America's great presidents that will be valuable for historians and political scientists alike.