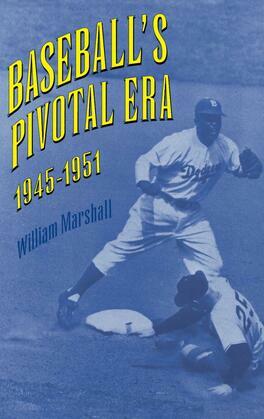 by William Marshall (Author)
Buy for $12.95 Excerpt
Nonfiction History History by country United States Nature, recreation and sports Sports & recreation Baseball Sociology of sports
warning_amber
One or more licenses for this book have been acquired by your organisation details

With personal interviews of players and owners and with over two decades of research in newspapers and archives, Bill Marshall tells of the players, the pennant races, and the officials who shaped one of the most memorable eras in sports and American history.

At the end of World War II, soldiers returning from overseas hungered to resume their love affair with baseball. Spectators still identified with players, whose salaries and off-season employment as postmen, plumbers, farmers, and insurance salesmen resembled their own. It was a time when kids played baseball on sandlots and in pastures, fans followed the game on the radio, and tickets were affordable. The outstanding play of Joe DiMaggio, Stan Musial, Ted Williams, Bob Feller, Don Newcombe, Warren Spahn, and many others dominated the field. But perhaps no performance was more important than that of Jackie Robinson, whose entrance into the game broke the color barrier, won him the respect of millions of Americans, and helped set the stage for the civil rights movement.

Baseball's Pivotal Era, 1945-1951 also records the attempt to organize the Pittsburgh Pirates and the Mexican League's success in luring players south of the border that led to a series of lawsuits that almost undermined baseball's reserve clause and antitrust exemption. The result was spring training pay, uniform contracts, minimum salary levels, player representation, and a pension plan—the very issues that would divide players and owners almost fifty years later.