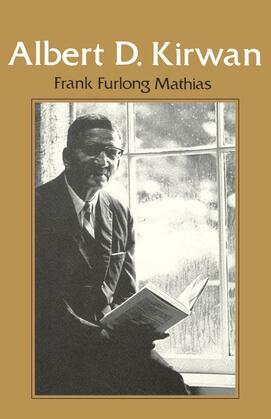 The name Albert Kirwan is inextricably bound with the University of Kentucky—in sports, scholarship, and administration. His skills and interests were so many and varied that his accomplishments in one area could not long satisfy his restless nature; he captained and later coached the U.K. Wildcats, took degrees in law and history, wrote or edited six books, taught a full load of classes, became dean of students, graduate dean, and finally, was unanimously installed as seventh president of the University.

Under his guidance, the UK graduate program was improved and strengthened; he presented the University's case before the National Collegiate Athletic Association council concerning the 1948–49 basketball gambling scandals; he helped to see the University through its first tense period of integration; and he was able to handle student activism in the 1960s with both courage and understanding.

Beyond this, he was a gentle, devoted family man. His wife, Betty, his sons, and his sister have shared their memories of Albert Kirwan, providing much of the material included in the biographical section of this book; and Kirwan himself left a tape, "Some Memories of My Life," recorded in 1971, which Frank Mathias has blended with information culled from letters, files, and interviews.

During his lifetime, Albert Kirwan was often invited to speak before historical associations, at commencement exercises, athletic assemblies, on television, and on radio. Records of these speeches document his far-ranging thoughts on history, education, athletics, politics, the South, the Civil War, and civil rights, revealing him as a responsible and responsive liberal Kentucky gentleman. He was a man of many moods, and had a wry, tongue-in-cheek humor that enlivened his lectures and talks. The second section of the book is a selection of his speeches, letters, and excerpts from his articles and books, including a chapter from John ]. Crittenden: The Struggle for the Union, which won the Sydnor award. Reproduced here are Kirwan's analysis of the Kentucky court struggle of the 1820s and his statement before the Southeastern Conference on the penalty assessed against Kentucky's basketball team; and, here too are the more casual banquet speeches, the bantering affection of a warm, sensitive man among friends.

"Here is a man who has given his whole life to [the University of Kentucky]," Happy Chandler said of him, "... surely he must love it as perhaps no other person could."