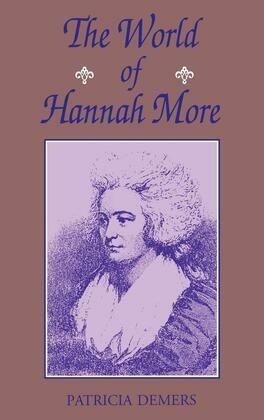 The World Of Hannah More

by Patricia Demers (Author)
Buy for $12.95 Excerpt
Nonfiction Biography & autobiography
warning_amber
One or more licenses for this book have been acquired by your organisation details

History has not been kind to Hannah More. This once lionized writer and activist—the most influential female philanthropist of her day—is now considered by many to be the embodiment of pious morality and reactionary anti-feminism. Largely because of her belief in separate spheres for men and women, More has been vilified by modern-day feminists. The first biography to examine the complete range of her life and work, The World of Hannah More depicts the author as a forceful voice in her own day and one who, from the point of view of plain justice, today deserves a more nuanced treatment. Without denying the problems More presents for modern readers, Patricia Demers has produced a balanced revisionist study of a woman enormously influential in late-eighteenth-and early-nineteenth-century England. By examining the career of this cultural warrior, situating her major texts in relation to contemporaries, and addressing her published writing, philanthropic activities, and voluminous correspondence, Demers anchors The World of Hannah More in the work itself—an appropriate and just response to a woman who took pride in living to some purpose. Trying to deal justly with More and her female moral imperialism requires admitting both the expansiveness and the limitations of her charity, methodology and vision. Without venerating or trivializing, Demers pursues the doubleness and contradictions of More's largely neglected or superficially mined works, from the determined experiments of the earliest plays to the poignantly revealing essays on practical piety, Christian morals, and Saint Paul.