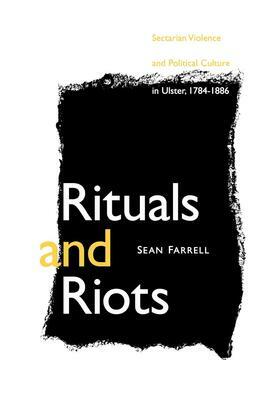 Sectarian violence is one of the defining characteristics of the modern Ulster experience. Riots between Catholic and Protestant crowds occurred with depressing frequency throughout the nineteenth century, particularly within the constricted spaces of the province's burgeoning industrial capital, Belfast. From the Armagh Troubles in 1784 to the Belfast Riots of 1886, ritual confrontations led to regular outbreaks of sectarian conflict. This, in turn, helped keep Catholic/Protestant antagonism at the heart of political and cultural discussion in the north of Ireland.

Rituals and Riots has at its core a subject frequently ignored—the rioters themselves. Rather than focusing on political and religious leaders in a top-down model, Sean Farrell demonstrates how lower-class attitudes gave rise to violent clashes and dictated the responses of the elite. Farrell also penetrates the stereotypical images of the Irish Catholic as untrustworthy rebel and the Ulster Protestant as foreign oppressor in his discussion of the style and structure of nineteenth-century sectarian riots.

Farrell analyzes the critical relationship between Catholic/ Protestant violence and the formation of modern Ulster's fractured, denominationally based political culture. Grassroots violence fostered and maintained the antagonism between Ulster Unionists and Irish Nationalists, which still divides contemporary politics. By focusing on the links between public ritual, sectarian riots, and politics, Farrell reinterprets nineteenth-century sectarianism, showing how lower-class Protestants and Catholics kept religious division at the center of public debate.