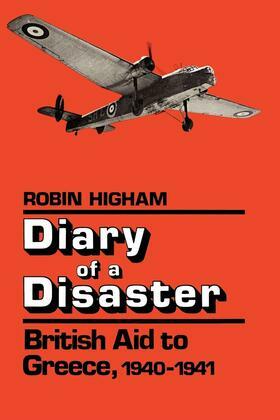 Diary of a Disaster

by Robin Higham (Author)
Buy for $12.95 Excerpt
Nonfiction History History by country Europe Great Britain Greece United States Other Military World War II
warning_amber
One or more licenses for this book have been acquired by your organisation details

On October 28, 1940, the Italian army under Benito Mussolini invaded Greece. The British had insisted on guaranteeing Greek and Turkish neutrality, despite the fact that Greece was never more than a limited campaign in an unlimited war as far as they were concerned. The British, however, were never quite sure that Greece was not their last foothold in Europe, and they harbored dreams of holding on to this last bastion of civilization and of protecting it with a diplomatic and military alliance—a Balkan bloc. These dreams bore little relation to military and economic realities, and so the stage was set for tragedy.

In Diary of a Disaster, Robin Higham details the unfolding events from the invasion, though the Italian defeat and the subsequent German invasion, until the British evacuation at the end of April 1941. The Greek army, while tough, was small and based largely upon reserves. They were also largely equipped with obsolete French, Polish, and Czech arms for which there was now no other source than captured Italian materiel. Transportation was also lacking as Greece lacked all-weather roads over much of the country, had no all-weather airport, and only one rail line connecting Athens with Salonika and Florina in the north.

Added to the woes of the Greek military, the British commander-in-chief for the Middle East, Sir Archibald Wavell, faced huge logistical challenges as well. Based in Cairo, he was responsible for a huge theatre of operation, from hostile Vichy French forces in Syria to the Boers in South Africa nearly six thousand miles away. His air force was comprised of only a handful of modern aircraft with biplanes and outdated, early monoplanes making up the bulk of his force. Radar was also unavailable to him. His navy was woefully short on destroyers and often incommunicado while at sea. While Wavell had roughly 500,000 men under his command, he was severely limited in how he could use them. The South Africans could only be deployed in East Africa and the Austrians and New Zealanders could not be employed without the consent of their home governments. In short, Churchill had instructed Wavell to offer support that he did not really have and could not afford to give to the Greeks.

Higham walks readers through these events as they unfold like a modern Greek tragedy. Using the format of a diary, he recounts day-by-day the British efforts though the failure of Operation Lustre, which no one outside of London thought had any chance of stemming the Nazi tide in Greece.