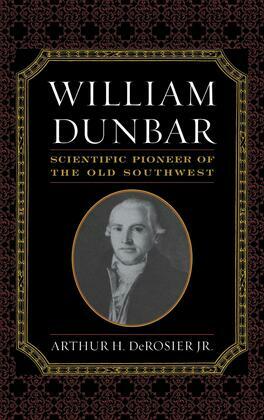 by Arthur H. DeRosier (Author)
Buy for $12.95 Excerpt
Nonfiction Biography & autobiography Adventurers & explorers Historical Science & technology
warning_amber
One or more licenses for this book have been acquired by your organisation details

Scottish-born William Dunbar (1750–1810) is recognized by Mississippi and Southwest historians as one of the most successful planters, agricultural innovators, explorers, and scientists to emerge from the Mississippi Territory. Despite his successes, however, history books abridge his contributions to America's early national years to a few passing sentences or footnotes. William Dunbar: Scientific Pioneer of the Old Southwest rectifies past neglect, paying tribute to a man whose life was driven by the need to know and the willingness to suffer in pursuit of knowledge.

From the beginning, research, contemplation, and scholarship formed the template by which Dunbar would structure his life. His mother's insistence on education motivated him throughout his youth, and in 1771, he sailed to America, prepared to seize any and all opportunities. Settling in the Mississippi territory, Dunbar embarked on the endeavors that would soon gain him renown. He surveyed the boundary between Spanish West Florida and the United States and contributed heavily to the rise of cotton culture through his inventions and innovations in agricultural technology.

In 1804, at the same time that Lewis and Clark were making their way up the Missouri River, President Thomas Jefferson appointed Dunbar—now a fellow member of the prestigious American Philosophical Society—to lead a similar exploration of the southern Louisiana Purchase territory. The 103-day expedition captured the imagination of Americans looking to move westward and yielded the first information about the geographical, geological, and meteorological characteristics of the old Southwest.

Arthur H. DeRosier Jr. traces Dunbar's life from his ambition as a youth to his development into a man recognized by his contemporaries as a leader in many scientific fields. Drawing upon the private journal of Dunbar's granddaughter Virginia Dunbar McQueen and neglected historical annals, William Dunbar examines Dunbar's public and private life, the scope of his interests, and the lasting contributions he left to a country and people he loved.