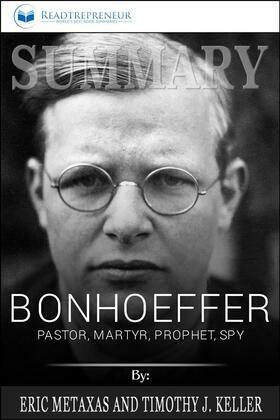 by Readtrepreneur Publishing (Author)
Buy for €5.99 Excerpt
Nonfiction Biography & autobiography Personal memoirs History
warning_amber
One or more licenses for this book have been acquired by your organisation details

(Disclaimer: This is NOT the original book, but an unofficial summary.)

A moving narrative of the German who was brave enough to stand against Hitler. From the bestselling author of Amazing Grace, Eric Metaxas knocks it out of the park again with an amazing biography of Dietrich Bonhoeffer who it's now recognized as one of the bravest heroes of the 21th century. Witness how Bonhoeffer faced the nazi regime as a double-agent in order to stop Hitler even if it meant risking his own life.

(Note: This summary is wholly written and published by Readtrepreneur. It is not affiliated with the original author in any way)

"Being a Christian is less about cautiously avoiding sin than about courageously and actively doing God's will." – Eric Metaxas

Follow the thrilling story of a man who joined the plot to assassinate the Führer disregarding his own safety so he could help Europe be released of the Nazi regime. Including stories related to his religious beliefs, his life as a double-agent and even the tale of his passionate romance, Bonhoeffer has every ingredient for an outstanding book. Despite being hanged at the Flossenbürg concentration camp at the age of 39, Dietrich Bonhoeffer's efforts as a double-agent where of huge importance to stop the Nazi regime.

P.S. Bonhoeffer is an extremely interesting book that tells the tale of one of the bravest and most heroic men of the twentieth century.