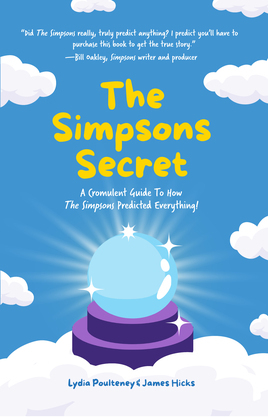 A Cromulent Guide To How The Simpsons Predicted Everything! (Celebrate Dad's Day with this Happy Father's Day Gift)
by Lydia Poulteney (Author), James Hicks (Author)
Buy for $9.99 Excerpt
Nonfiction Arts Mass media Television History & criticism
warning_amber
One or more licenses for this book have been acquired by your organisation details

Have You Ever Wondered How “The Simpsons” Predict the Future?

“Did The Simpsons really, truly predict anything? I predict you’ll have to purchase this book to get the true story.” ―Bill Oakley, Simpsons writer and producer

Then, The Simpsons Secret is the book for you. Delve into some of the biggest predictions that came true on the show, and just how the Simpsons predict the future.

Simpson predictions from three-eyed fish to presidential elections. "The Simpsons" has been predicting major events with scary accuracy for over three decades. From Donald Trump's presidency to Disney buying 20th Century Fox (...years before it happened!). People just can't seem to get enough and are eager to know what they are going to predict next. This book goes behind the scenes of this adored cartoon series, and the family we’ve grown to love. Between Homer, Marge, Bart, Lisa, and the rest of the Simpsons family, the show has stolen our hearts, and also left us amazed at how often the Simpsons predict the future!

So how do they do it? Is it a crystal ball? A fountain of knowledge? Have the writers gained the ability to travel through time? As shocking as it may seem, the answer is actually a little simpler than that. The cartoon crew is not in a secret society that can see the future, nor have they mastered the art of time travel.

In The Simpsons Secret, learn more about:

If you enjoyed books like Springfield Confidential, The Simpsons Family History, Friends Forever, or The Office, you’ll love The Simpsons Secret.