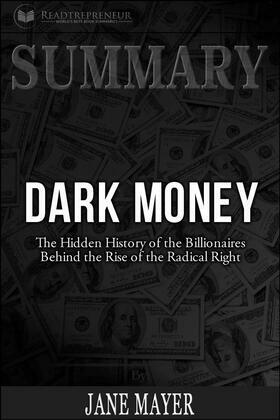 Summary of Dark Money: The Hidden History of the Billionaires Behind the Rise of the Radical Right by Jane Mayer

by Readtrepreneur Publishing (Author)
Buy for €5.99 Excerpt
Nonfiction Social science Political science Human science Philosophy Political
warning_amber
One or more licenses for this book have been acquired by your organisation details

Dark Money: The Hidden History of the Billionaires Behind the Rise of the Radical Right by Jane Mayer | Book Summary | Readtrepreneur

(Disclaimer: This is NOT the original bookm but an unofficial summary.)

If you care about the future of American democracy, you must mark this book as "must read". Dark Money on top of its awesome title, offers an in-depth analysis of the current political/economic status of the United States of America. It mainly focuses on the economic inequality that has overwhelmed the country and the negligent decisions disregarding the environment's well-being.

(Note: This summary is wholly written and published by Readtrepreneur. It is not affiliated with the original author in any way)

"Without the rigorous peer-reviewed standards previewed by prestigious academic publications, the Olin Foundation was able to inject into the mainstream a number of works whose scholarship was debatable at best." – Jane Mayer

In Dark Money, Jane Mayer debunks a common belief about the reason behind the economic and political state of the country. With a large amount of evidence, she showed how a network of incredibly wealthy people played a big role on bending the American political system to their will. At the end of the book, you will learn a large array of things you thought you knew and learn so much about politics and economics along the way.

P.S. Dark Money is an enriching book that will teach you how America is run and how it affects you.