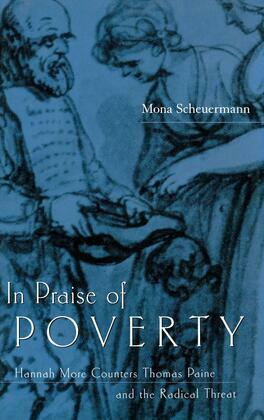 In Praise of Poverty

In her own time and in ours, Hannah More (1745-1833) has been seen as a benefactress of the poor, writing and working selflessly to their benefit. Mona Scheuermann argues, however, that More's agenda was not simply to help the poor but to control them, for the upper classes in late eighteenth-century England were terrified that the poor would rise in revolt against Church and King.

As much social history as literary study, In Praise of Poverty shows that More's writing to the poor specifically is intended to counter the perceived rabble rousing of Thomas Paine and other radicals active in the 1790s. In fact, her Village Politics was written by request of the Bishop of London as a direct response to Paine's Rights of Man. The much larger project of the Cheap Repository Tracts followed, and More was still writing in this vein two decades later. Scheuermann effectively, and perhaps controversially, places More in the context of her period's debate about the poor, proving More to be not a defender of the poor but of the conservative upper-class values she so wholeheartedly espoused.