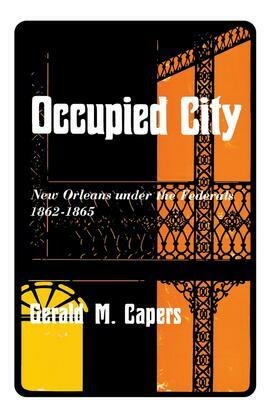 by Gerald M. Capers (Author)
Buy for $12.95 Excerpt
Nonfiction History History by country United States Other Military Historical period Civil War period (1850-1877)
warning_amber
One or more licenses for this book have been acquired by your organisation details

New Orleans is the largest American city ever occupied by enemy forces for an extended period of time. Falling to an amphibious Federal force in the spring of 1862, the city was threatened with the possibility of Confederate recapture even as late as 1864. How this tension affected the lives of both civilians and soldiers during the occupation is here examined.

Gerald M. Capers finds that the occupation policies of General Benjamin F. Butler and General Nathaniel P. Banks were successful and that Butler's harsh policies were by no means as vicious as legend would have it. Banks at first reversed Butler's harsh policies, but was gradually compelled to become less lenient. Banks did succeed in establishing a civil government under Lincoln's orders, but Congress refused to recognize the civil government and imposed a reconstruction government at war's end.

Life for the average resident of New Orleans, Capers states, was much better during the occupation than it was for Southerners in areas still in Confederate control. Relative economic decline had begun in the 1850's but New Orleans even enjoyed a war boom during the last two years. And although America's only brief experience as an occupation force at the time had been in Vera Cruz during 1846, Butler and Banks performed their duties well.