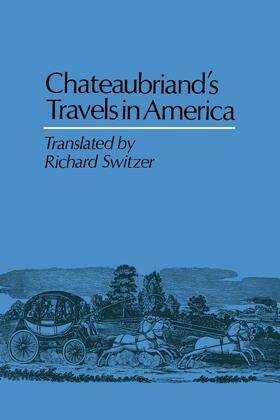 Chateaubriand's Travels in America, presented here in its first modern translation, was a reflection of the attitudes of his epoch toward the New World. And at the same time, because of his enormous literary reputation, it has continued to be a major source of European impressions about America. The America portrayed by Chateaubriand was much more a product of his reading and his imagination than of his actual visit. (His supposed itinerary included a trip up the Hudson to Albany, a visit to Niagara Falls via the Mohawk Trail, a trip down the Mississippi to the Natchez country, and even a visit to the Carolinas and the southern tip of Florida). Though the Frenchman of the nineteenth century could have obtained a much truer picture of America in any number of realistic works, he still chose the poetic evocation of Chateaubriand because he shared the same temperament, the same prejudices, and the same particular view of the world.