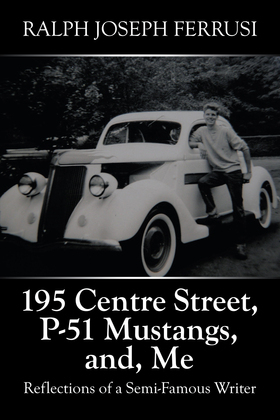 by Ralph Joseph Ferrusi (Author)
Buy for $3.99 Excerpt
Nonfiction Biography & autobiography Adventurers & explorers Personal memoirs History
warning_amber
One or more licenses for this book have been acquired by your organisation details

195 Centre Street: It’s summertime, and the kitchen windows are open and a warm, gentle breeze is blowing the spotless white lace curtains into the room.

P-51 Mustangs: In my opinion, it’s the most perfect airplane ever to take to the skies.

And, Me: I never “wanted to be a writer”. I wanted to be a pilot, and fly P-51 Mustangs like Don Gentile, and Ratsy Preddy. So, I took a flying lesson, and found I really didn’t like flying. My Life-Long Dream of Being a Pilot shattered, the next day I wrote my first Award-Winning newspaper column, and, it was published. Yeah, right...

I began writing this book in 2015, putting together some ruminations and reflections. I slowly added to it over the years: new things I wrote, old things I discovered I had written, some things that other people wrote that made me laugh out loud, or, knocked my socks off.