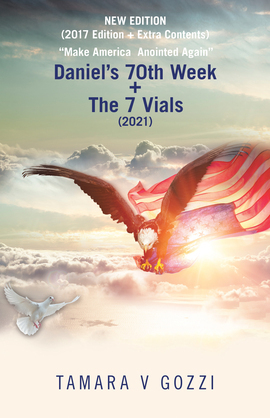 by Tamara V Gozzi (Author)
Buy for $3.99 Excerpt
Nonfiction Religion Christianity
warning_amber
One or more licenses for this book have been acquired by your organisation details

“Make America Anointed Again” explains how a nation can reach greatness and remain at the top. The destiny of the United States of America (the Eagle) is clearly described in the Bible from the Declaration of Independence until the Battle of Armageddon. This book will help you understand the prophecies of the end time, Israel’s God-given destiny; the role of America until the Second Coming; the role of the rest of the nations and more specifically of the “Revived Holy Roman Empire”. While America was heading straight toward globalism and the so dreamed One-World Government, here comes a president that nobody expected and that doesn’t believe in the New World Order, but is determined to secure the borders like never before. What we are experiencing right now in America is a clear intervention from Almighty God for the fulfillment of His end time plans and purposes. We are about to see major events occurring right ahead of us; therefore, we the people need to be instructed and prepared. This book was birthed to help everyone understand the Bible prophecies, and most importantly to help everyone to get ready for them. (2017 Edition).
Daniel’s 70th Week and the 7 Vials (2021 Extra Content) explain specifically the final seven years we’re about to step into and its major events in greater detail.