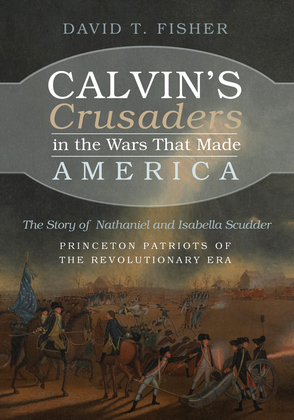 Calvin’s Crusaders in the Wars That Made America

Nathaniel Scudder, a well-educated Presbyterian physician, was an idealistic early advocate of the rebellion. Like many of his fellow graduates of the College of New Jersey (later Princeton University) he believed in the Calvinist vision of a pious republic. His wife, Isabella Anderson Scudder, a wealthy heiress and granddaughter of a royal governor, reluctantly accepted her husband's radical political inclinations while fearing the tragic consequences that might result.

After a brilliant career as a physician and elder of the Presbyterian Church, he was elected to represent New Jersey in the Continental Congress, where he became one of the signatories of the Articles of Confederation. He eventually grew so frustrated by the blatant corruption he experienced that he abandoned politics and helped form an extra-legal vigilante organization, the Retaliators. Nathaniel's inner journey to the abandonment of his congressional mandate in favor of participation in violent retaliation was driven by his friendship and admiration for David Forman, the main architect of the retribution strategy.

On October 16, 1781, Nathaniel Scudder became the only person who served in the Continental Congress to die in action in the War of American Independence. In a skirmish between Retaliators and Loyalists, he was struck by a bullet meant for David Forman.