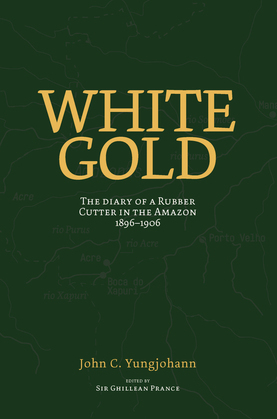 White Gold: The Diary of a Rubber Cutter in the Amazon 1896 – 1906, is a tale of humanity and the natural order working together in the midst of greed and ignorance. The crisis of the Amazon rainforest began more than a century ago when prospectors discovered the region was a rich source for rubber. This brought commercial interests into collision with the Amazon’s complex ecology—its plants, animals, and people. At the height of the rubber boom in the beginning of the 20th century, a young American, John Yungjohann, went to seek his fortune as a rubber cutter in Brazil, only to find himself struggling for survival.

White Gold‘s editor, Sir Ghillean Prance, leading expert of the rainforest and former director (emeritus) of the Royal Botanical Gardens at Kew, England, has enhanced Yungjohann’s text with his own contemporary photographs and identified the fungi, plants and animals mentioned in the pages of the diary. Yungjohann’s words are especially poignant today as an onslaught of extractivist policies threaten the Amazon and rain destruction upon the region, its incomprehensible biodiversity, and the peoples to which it is home.