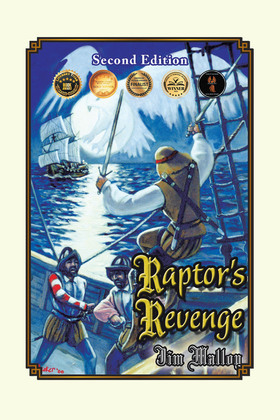 by Jim Malloy (Author)
Buy for $3.99 Excerpt
Fiction Historical
warning_amber
One or more licenses for this book have been acquired by your organisation details

Elizabeth, the first, sat the throne. Spain threatened.
"The hawks claws are no match for the serpent´s fangs," El Serpiente hissed as his blades reared back for the final blow. "Your death will taste sweet."
Jamey slumped against the rigging, clothes soaked in blood, and looked at Damon´s snake slanted eyes. Here was the murderer of his mother and father. Here was the monster that disgraced his sister. Here was the killer of his best friend. Here stood El Serpiente who Jamey swore over his father´s grave to kill.
Weak from his wounds, Jamey´s legs started to buckle as he watched Damon advance, sword high for the kill. As Jamey´s failure hit his soul, his father´s spirit voice surrounded him.
"Fear not evil, my son."
Remembering his vow, his mind clicked cold, warrior cold, and at that moment, El Serpiente saw his death in El Raptor´s eyes.