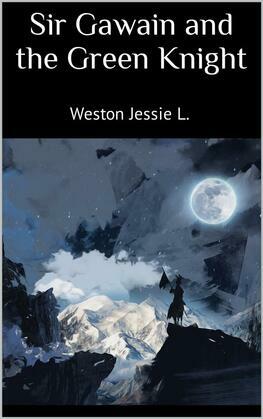 Sir Gawain and the Green Knight

The poem of which the following pages offer a prose rendering is contained in a MS., believed to be unique, of the Cottonian Collection, Nero A. X., preserved in the British Museum. The MS. is of the end of the fourteenth century, but it is possible that the composition of the poem is somewhat earlier; the subject matter is certainly of very old date. There has been a considerable divergence of opinion among scholars on the question of authorship, but the view now generally accepted is that it is the work of the same hand as Pearl , another poem of considerable merit contained in the same MS. Our poem, or, to speak more correctly, metrical romance, contains over 2500 lines, and is composed in staves of varying length, ending in five short rhyming lines, technically known as a bob and a wheel,—the lines forming the body of the stave being not rhyming, but alliterative. The dialect in which it is written has been decided to be West Midland, probably Lancashire, and is by no means easy to understand. Indeed, it is the real difficulty and obscurity of the language, which in spite of careful and scholarly editing will always place the poem in its original form outside the range of any but professed students of mediæval literature, which has encouraged me to make an attempt to render it more accessible to the general public, by giving it a form that shall be easily intelligible, and at the same time preserve as closely as possible the style of the author.